Software was eating the world — now landlords are eating everything 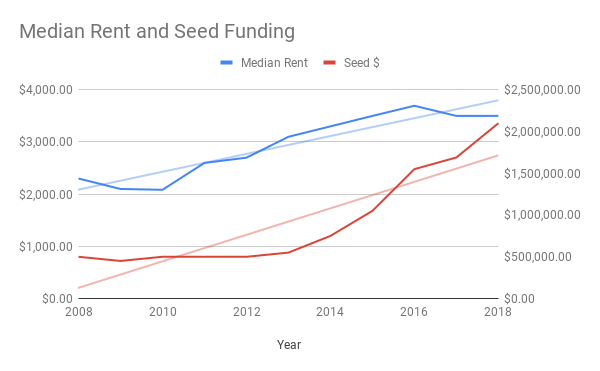 NEW: Looking for my latest San Francisco Voting Guide by Steven Buss? Check out the GrowSF Voter Guide, which I helped create!

tl;dr: Landlords are taking $1 of every $8 in venture capital investments due to well-organized NIMBYism that has captured San Francisco housing regulations in their favor. YIMBY has moved public opinion. Tech must now get involved.

Per employee, that’s an extra $1,050 ($1,521 pre-tax) per month sent directly to landlords. For a four-person startup, the yearly burn rate increased by roughly $73,000 (pre-tax) just in rent. If the seed round should last four years, that means an extra $292,000 in pre-tax expenses, with $201,600 of that being funneled directly to landlords instead of growing the company or other productive activity.

The 10-year view shows similar trends in both seed rounds and rents:

While landlords are getting an extra $201,600, seed funding increased by about $1.6MM. In other words: landlords have captured $1 out of every $8 in venture capital investment. This unearned rent is gained with one simple trick: stopping the expansion of the housing stock.

Long-time landowners in San Francisco have rigged the game against new immigrants to the city. They control the Board of Supervisors and the Planning Commission, and they’re insulated by Prop 13 which artificially caps their property taxes far below the market value of their land while stealing money from schools, infrastructure, and police.

The far-left likes to say “eat the rich.” In San Francisco, landowners say “eat everything.” 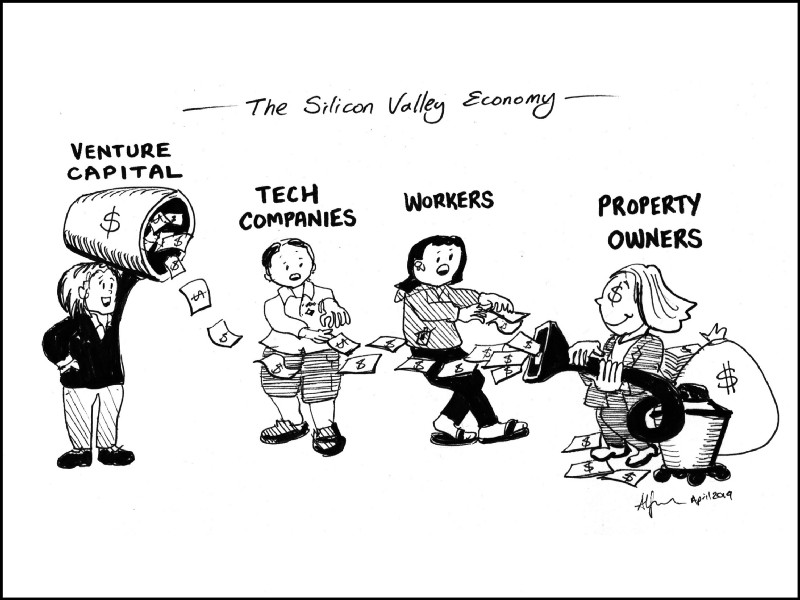 Consider the ROI of getting involved. Reducing each person’s monthly rent by $100 is worth about $1 billion statewide. Most CA ballot initiatives take less than $10M in funding to pass.

That’s at least a 100:1 payoff. With a budget of a few $million per year, we could accomplish this statewide.

The numbers are just as good when you look only at San Francisco. A $100 rent reduction is worth about $60 million per year. A Board of Supervisors election costs about $250,000 per candidate, and local ballot initiatives can win for less than $500,000. We can pass a ballot prop which would rezone the entire city for dense housing for less than a single seed round.

This isn’t a technology problem

The fundamental truth of the Bay Area is that what you think is a tech problem is actually a political problem. (Read: “Explaining the Broken Housing Politics of San Francisco” and “The Staggering Inequity of the San Francisco Planning Commission.”)

We already have the technology to build affordable homes. 3D printed homes, modular construction, innovative materials, crowdfunded mortgages, apps to connect homeowners with renters, AirBNB, capsule hotels, co-living: none of it matters. The core problem is that Bay Area governments are broken.

Politics is an organizational problem, not a technological one. The most innovative solutions don’t matter when your government has been captured by interests that want to freeze the city in amber. There’s a reason Uber didn’t start by asking San Francisco for permission — they would have failed before they started. Housing developers don’t have that luxury.

An end to cynicism

Tech has sat on the sidelines of politics for too long, despite being blamed for all of its problems.

Many of us feel that local politics is too small or too inconsequential to be worth thinking about. But the reality is that local politics impacts your day more than anything else. The high cost of housing, the dirty sidewalks, the broken roads, the unsafe bike lanes, the crippling traffic and pitiful transit system are all due to bad local politics.

I’ve heard from people that believe we can make self-driving cars or establish colonies on mars say we can’t possibly fix a broken bureaucracy. That the status quo is too entrenched, and there’s nothing any one of us can do. It’s the same cynical view of the world that tells founders they can’t disrupt an industry.

Cynicism is often seen as a rebellious attitude in Western popular culture, but, in reality, cynicism in average people is the attitude exactly most likely to conform to the desires of the powerful — cynicism is obedience.

Indifference and cynicism are not traits we bring to technology, why do we bring it to politics?

The YIMBY movement, led locally by YIMBY Action is a political coalition of the outraged. We’ve cast off our indifference and cynicism and loudly advocated for “yes in my back yard” to new housing and new neighbors

YIMBY has succeeded at moving popular opinion to support housing. Politics is lagging behind.

Support for More HOMES in San Francisco was even stronger, at 74%. Despite this popular support, every member of the San Francisco Board of Supervisors voted to oppose More HOMES, except for Asha Safai and Vallie Brown (who is running for reelection right now — give her your support!).

Our city leaders are not serving the people of San Francisco, they’re serving only those who profit from scarcity.

SB50 was killed in the state house by Anthony Portantino, who calls himself a Democrat. If you know people in his district who want to run to unseat him, you should help their campaigns.

We have swayed elections, but we need to win more

YIMBY was instrumental in getting Mayor London Breed elected. She understands that the city must build more to make housing more affordable.

We helped get Senator Scott Wiener and Assemblymember David Chiu elected to represent San Francisco. East Bay YIMBY activists have helped get Buffy Wicks and Nancy Skinner elected. They’re all allies in the fight for more homes and they all consistently introduce groundbreaking legislation at the state level to solve our housing shortage.

But we lost every Supervisor race in November 2018. I took two months off of work and volunteered nearly every day to help get Sonja Trauss elected, and YIMBY members collectively gave thousands of hours and dollars to help the fight, but we came up short.

Fortunately, we know the solution: target the DCCC. The local Democratic party, controlled by the DCCC, endorsed a full slate of NIMBYs in the last election. This endorsement, chosen by a small group of political insiders, is worth at least 30% in the election. Getting good people on the committee means pro-housing candidates will win the elections. Winning a majority of DCCC seats would only cost about $1MM every four years, and that small investment would mean we would start winning every seat.

We need your help, your time, and your money to win.

How can we fix San Francisco

Tech must get involved. Here’s how:

1. Get pro-housing and pro-tech people on the DCCC.

The DCCC controls the Democratic party endorsement. Whoever gets that endorsement wins the election.

It only takes a few dollars to win. Can you spare a bit for my campaign?https://buss2020.org/donate.

I believe we can fix San Francisco.

This is my first time running for office. Unlike the people who’ve been running this city, I actually care about evidence and make data-driven decisions. I’m a software engineer and a YIMBY activist.

I believe in well-regulated free markets that align private incentives with public good, not heavy-handed paternalism that bans things I don’t understand.

I believe in acting swiftly on what the data tells us: that an over-regulated housing market has created a staggering shortage of homes, and we need to reform or repeal our restrictive and illiberal housing laws now.

2. Get six pro-tech and pro-housing people on the Board of Supervisors.

This can only be done through volunteer time and monetary support. Vallie Brown is the only pro-housing Supervisor and she’s running for reelection. She needs your time and money.

The next Board of Supervisors election is in 2020. We need six people to have a majority.

3. Join or Donate to YIMBY Action

Join YIMBY so you will stay informed and be ready to help in upcoming races.

Help pro-housing activists fix our broken politics. You can join as a dues-paying member. If you are interested in larger, institutional, or tax-deductible donations, get in touch with me by email or twitter DM.

Our five year plan involves staffing up ($2MM per year at full capacity), getting people elected, and running ballot campaigns. We will upzone the city for dense housing, we will lower the cost of living, we will make San Francisco a welcoming place, but we need your support.

Vallie Brown, London Breed, Scott Wiener, David Chiu, Buffy Wicks, and Nancy Skinner are all fighting to fix our broken system and kick out the crooks who put us in this mess.

Volunteer time or resources for YIMBY and YIMBY-aligned candidates.

Vallie Brown is running a campaign for November 2019 and she’s our best ally on the Board of Supervisors. She’s the only Supervisor who’s actually fought hard to build more (and her opponent wants to double-down on SF’s failed policies while imposing impossible purity tests on any new housing).

I’m running a campaign for March 2020. We both need your help.

We are blamed for every problem the city faces while the real problem is a government completely incapable of governing, and a regulatory process captured by landed interests. We can no longer afford to sit on the sidelines of politics. We are not insulated from bad government — in fact, it is transferring money to those who need it least and are providing no value to society in exchange for this windfall while simultaneously hurting innovation.

For at least the past thirty years San Francisco has been led by people who would rather shout at newcomers to “go back where you came from” than fix its problems. They’ve blamed yuppies and sushi, buses, tech workers, neoliberalism, wealthy foreigners and immigrants, capitalism, Airbnb, people who live in large houses, and people who live in shared rooms. They’ve blamed everyone but themselves for mismanaging the city.

If we’re going to take the blame for the problems of the city, we might as well start trying to fix it.

You can give your time, your money, or your voice, but you can’t give nothing.

Whatever you do, stop letting them blame us for their failures.

Thank you to Gillian, Morgan, Dana, Matt, Keith, and Max for thoughts, suggestions, and edits.