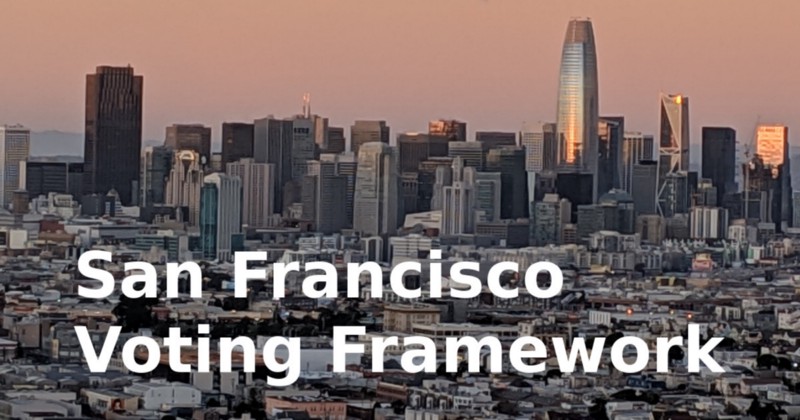 I have a general voting framework for ballot props which works most of the time. I’ve developed this framework over several elections and it is now fairly stable:

Don’t just vote NO on every ballot initiative. California’s broken tax system requires that way too many things go to the ballot because the legislature doesn’t have the constitutional authority to pass certain taxes and other laws. Voting NO for everything based on a principle of “we shouldn’t have to vote on so much” ensures the state is poorly run. My long term strategy with much of my political activism is to undo these rules and to bring California back to full representative democracy where ballot initiatives are rare.

1. Prefer to vote for new taxes, preferably without a set-aside

Due to Prop 13, Californians must vote on all new taxes. This was part of the “taxpayer revolt” led by Howard Jarvis in the 1970s. It was designed to limit new taxes by forcing all new taxes to go to a popular vote. The analysis of Prop 13 at the time was telling: it predicted massive shortfalls in public funding for schools and local governments. Indeed, this prediction came true. It’s one of the reasons that the University of California system is no longer free, and why our primary education system is so bad.

I prefer to vote for new taxes because in a healthier democracy these taxes would be imposed by the legislature. By the time the tax makes it to the ballot, it already has support from lawmakers and we should respect that process by having a strong bias in favor of the new taxes.

When I say “preferably without a set-aside,” I mean that I prefer new taxes to go to the general fund. Public money in the general fund can be appropriated during the regular budgeting process and can thus be directed towards whatever is pressing. Budget set-asides, in contrast, are reserved for the particular cause and cannot be used if the city experiences a budget shortfall. During the next recession, for example, we will be forced to spend tax money on trees and arts subsidies instead of school children and infrastructure.

2. Vote for groups that don’t have a strong lobby (youth, disabled, homeless, low-income people, the environment)

This should be self-explanatory.

These ballot props deserve a proper reading, but if you consider yourself a democrat then you should probably go ahead and approve these measures.

3. Vote for social policy change in ways that agree with my values

For props in this category, I will endeavor to explain my values and why you should adopt them.

4. Vote for things that price externalities

Avoid the tragedy of the commons: put a price on carbon emissions, packaging waste, miles driven, etc. Anything that has a diffuse negative impact that nobody pays for must be priced by a government-mandated market.

5. Vote against things which increase needless or unhelpful bureaucracy

Do you have any idea how many commissions and “oversight” bodies San Francisco has? Neither do I — we have too many to count. Bias towards saying no to passing the buck to a new bureaucratic agency.

6. Vote against things which infringe upon rights of the people

This rarely comes up, but it looks like: limits on speech, rolling back rights (eg making gay marriage illegal again), limiting what people can consume or pay for.

I find propositions like this fundamentally illiberal. We should default to more liberty and less central control of our lives.

8. Generally vote against budget set-asides, which limit the ability of representatives to budget effectively

Closely related to #1, but this doesn’t implement any new taxes. There’s literally no reason a prop like this ever needs to be on the ballot. The legislature (or Board of Supervisors) already has the ability to fund programs during the budgeting process. When you see something like this, it means they found a way to fund a pet project using language they believe voters will like. We’ll be stuck with that decision in the next recession because this can only be changed with another popular vote.

9. Vote to liberate funds from budget set-asides, to be useful for other purposes

I wish this category showed up more often, but it’s extremely rare. Any time a budget set-aside is up for repeal, VOTE YES. Let the legislature control budgeting!

Due to Prop 13, San Francisco’s (and California’s) infrastructure is dramatically under-funded. We need to fix our roads, transit, bike lanes, rail roads, sewer, electricity, etc, etc. Let’s pay for it!