San Francisco just passed an increase to the fees on new office construction and it’s being sold as “$400 million for affordable housing.” In fact, of the $400 million, only $154 million is new revenue, and it’s spread out over20 years. That works out to only $8 million per year in new revenue (or about 30 units of subsidized housing1).

This comes at a cost of $300 million to GDP and over 1000 jobs lost over 20 years, and higher rents for nonprofits and businesses. We can build more low-income affordable housing by lowering barriers instead of killing the economy that employs San Franciscans and funds government services.

San Francisco imposes “impact fees” on all new construction — both office and residential. These fees are meant to pay for necessary infrastructure improvements to accommodate a new building. For example, a new building with 700 apartments will clearly have a measurable impact on sewer usage, so an impact fee for expanding the sewer makes sense.

This fee on new office construction is intended to fund subsidized Affordable housing. We currently charge $28.57 per square foot which generates about $12.3 million per year, or about $246 million over twenty years. The new fee is $69.60 which will generate about $400 million over twenty years. Yet the Supervisors are claimingall of the $400 million is new revenue, when it’s just $154 million.

In what dystopian universe does building new affordable housing and growing your population result in a decline in GDP and job loss?

In the one run by the San Francisco Board of Supervisors.

Look at the cost of raising this $8MM per year: 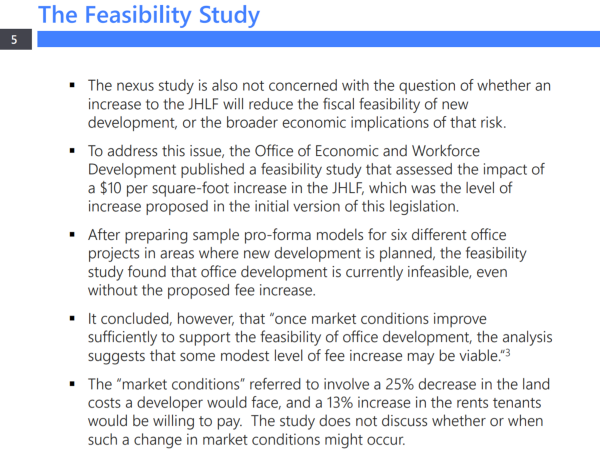 A previous study found a $10 per square foot increase in the fee would only be feasible if we had a “25% decrease in the land costs a developer would face, and a 13% increase in the rents tenants would be willing to pay.” Yet we just passed a $41 per sq.ft. increase.

Barring a recession or a citywide upzoning, we will never see a 25% decrease in land costs. So, instead, we’re going to see an astronomical rise in rent.

This might be exactly what the Board of Supervisors wants. Housing is not affordable because we have too many workers eating up the limited housing supply. If we are not going to build more housing, the Supervisors conclude, then the workers must go! The Supervisors are eating the golden goose.

San Francisco is now the least friendly American city for business, and that’s before the effects of this policy change take effect. It’s no wonder that Stripe announced plans to leave San Francisco.

New high-tech jobs have kept the city solvent in the face of its looming pension crisis, and the Board of Supervisors are trying to squeeze out ever more. They’ve been handed one of the world’s most vibrant and innovative economies, a highly educated population, and the strongest national economy in decades, and they show us over and over that they don’t deserve it. They can’t make the simplest reforms to make the city more affordable.

Rather than adopt this absurdly high fee that the city economist is already predicting will hurt the city, we should be reducing barriers and fees on both affordable and market-rate housing.

The jobs-housing imbalance is real, and we need sensible policy solutions to help. For the past decade, the Bay Area has been adding 8 jobs for every 1 new unit of housing. That means high competition for housing which drives up prices. When someone gets a job here but can’t live here, they don’t just disappear — they end up living in Stockton or Tracy and becoming a supercommuter: driving multiple hours each way just to make a living.

This is bad for public health and for the environment. We need to legalize new housing near jobs. We need to invest in public transit. We need a government that says yes to housing instead of no to jobs.

I don’t trust people who advance policies like this to run a city with a $12 billion budget, let alone to shepherd the city through the next recession. It seems that every time they have the chance to enact good, forward-thinking policy, they score an own-goal and end up hurting the city. They care more about pushing feel-good soundbite-ready policies than doing the hard work of running a city well.

I’m running for DCCC because I’m tired of these same innumerate people running one of the most dynamic cities and economies in America. If you’re sick of it, too, then please support my campaign!